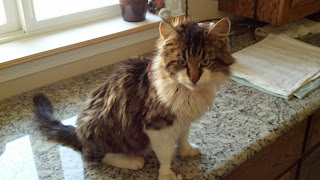 Moses came into our lives in such a strange way. A few weeks before Christmas in 2011 I had been talking to mom on the phone when she heard a noise downstairs. She got nervous and while I was still on the phone with her, went down to investigate. She found this scruffy, nasty little kitten crawling about in her recycle bin and licking the old cat food cans. She tried to shoo it away but it just wouldn't leave. My parents live way out in the country, out in the middle of nowhere. Where did this little guy come from? A few weeks went by and he was still hanging around. She'd tried getting rid of him, even squirting him with the hose but he was undeterred. He needed food, love and help. He'd always be waiting there by the back door for her.

She asked around at the country vet to see if anyone was missing a kitten. No one was. This guy still had his fuzzballs and they were huge. He had 2 extra toes on his front feet and 1 extra toes on his back feet. It looked like maybe he was a Maine Coon. He was gonna be a BIG BOY.

When we came down to visit this poor guy was still hanging around. He was smelly and his fur was all matted in clumps. I fell in love with him instantly. While Ira was outside enjoying his coffee, the little kitten hopped up on the railing, sniffed his coffee (but didn't touch it!) and then looked up at him and gave a loud "Myaaaaap." Ira decided he wanted that cat. He had always kinda wanted a Maine Coon but wasn't generally fond of cats. He liked Paul well enough, but that was my cat. He found his.

We weren't supposed to have more than 1 cat according to our lease and I was a little worried how Paul might react. Ira was adamant. So we took Moses (mom told us he said his name was "Moses with the toeses) to the vet to get neutered and get his shots. He also needed to be defleaed and dewormed. When they were shaving off his nastiest hair mats, they found an abscess on his side about the size of a life saver. It was infected and giving off yellow puss. POOR KITTY! No wonder he needed help. So also a round of antibiotics for the little guy. The vet determined he was probably born around May 2011, maybe 6-8 months old. He's had some teeth knocked out that still to this day haven't grown back. 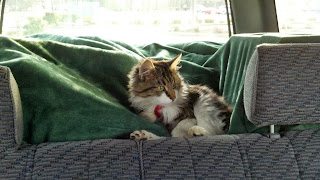 We found him a little harness and leash and headed for home in Seattle, about a 12.5 hour drive. He refused the kitty carrier and I couldn't take the screaming any more. Once we let him out he stayed either in the back of the 4Runner sleeping or in Ira's lap, sleeping. At rest stops he'd go out on the leash and even went potty for us! He was acting more like a puppy than a cat.

When we got him home, we kept him in his own room away from Paul with his own little potty box. Over the course of a few weeks we slowly introduced the two of them. Poor Moses had a terrible, noisy cold but since he was still on antibiotics we kept him warm and fed and he got better quickly. 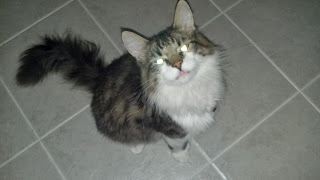 Then he started to grow. AND GROW. AND GROOOOOW!! According to his age, he still won't be done growing until next Spring.

Moses is quite the opposite of Paul. He loves people food. He only has one meow and that's a hearty "MYAAAAAAP". When fireworks are going off outside and Paul is running for his life under the couch, Moses goes right up to the window to see what's going on. Mo will sleep with us most nights. He goes for walks on his leash. He loves car rides. He loves to run and pounce and chase but refrains from scratching on furniture he shouldn't and has never had an accident outside the litter box. Though with just Paul, we had one box that could be scooped weekly. Now we have 2 boxes that get scooped every other day. What goes in, must come out and Moses eats A LOT.

Moses doesn't care for butt pats. He likes his face and nose rubbed really hard. He doesn't like getting brushed (Paul very much enjoys it) and with all of his fur we must vacuum often.

Moses is clumsy and funny but if you haven't given him proper attention he turns into a hellion at night. He knocks over anything and everything he can find. He'll open and close cupboards just to make them thump. He'll get into the bathroom drawers and pull all of the hair ties out. He's gotten the nickname "Destructa-mo"!

He doesn't seem as smart as Paul sometimes. It took a long time to get him to respond to his name. I think I can get him to "sit" after saying it a few times. That or he gets lazy and sits on his own since I'm standing there talking to him. It can be hard to get him to chase a laser light or a fluffy thing. He'd rather lay on his side and sort of bat when it goes by... and then start attacking the table legs instead with his massive back feet.

He's a good cat. He's Ira's cat. We love him very much but are so thankful Paul is there to "entertain" him while we're at work so we can return to a standing house. Someday we'll get a bigger house with a backyard that he can play in and get some of that energy out. Hopefully before he's done being a young playful kitten. A hefty 15 lbs kitten...