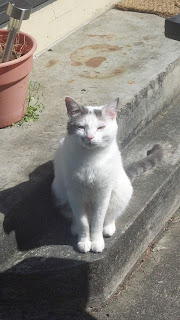 Paul. AKA "Paulie Prissy Pants" or "Meowmers". Our domestic shorthair born sometime in June of 2009 I acquired him from a cute young couple off of Craigslist around June of 2010. I had been looking for a little kitten and going to the shelters but no one would allow me to take 1 kitten home to a house without other cats. Nothing I could say would convince them otherwise. Plus there was the cost of the rehoming fees. I was getting a little irritated and just needed a companion. The little kitten I saw on Craigslist was adorable and in a wad of plastic grocery bags and FREE. 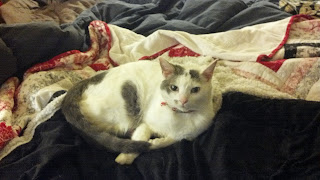 I took in Paul and it wasn't love at first sight. He made me a little nervous. He was also nervous. Twitchy. Scared. Hyper aware. I've had cats before but never one so high strung. I was worried it might not work out. A coworker convinced me to give it a week to get to know him. After that I was in love. He doesn't always like to cuddle and usually prefers his independence. That's why it feels all the more endearing when he brings his little purring face close to mine and snuggles in.

Paul LOVES plastic grocery sacks. They're his weakness. He'll even pull them out of trash cans and start licking away at them. I'm not sure why... Target bags are his favorite. He also will get into every box, every bag, every cabinet you open. If I'm carrying around a laundry basket, he wants to jump in and get rides. Ira and I stumbled upon a curious game that he loves accidentally. We were folding a blanket in the living room when Paul got really excited and jumped into the middle of the blanket. We bounced it around a little and let him down. He wanted MORE! We swung him around a bit and he just started purring. Now if we're making the bed or folding blankets, he'll usually rush over for a quick couple tosses in the air. For a cat that's so uptight for the most part it blew our minds that he would enjoy that.

He doesn't care for people food except yeasty bread. Especially Subway sandwich bread. He's not big on wet food either. Just likes his kibble. It's really hard to get him to drink water out of a bowl but he'll do it in desperation. Otherwise he'll chirp and chatter at us until we go turn the sink on for him in the bathroom.

He certainly seems to have a big vocabulary with all of his little mews and shrill cheeps. He also seems to understand us pretty well. He'll follow basic commands the first time you ask and responds to his name and a fair number of compliments. His other favorite thing in the world is having his butt pat. Right at the base of the tail he likes to be spanked.

Some of his weird quirks or slight downsides are he only likes to be held and cuddled on the right shoulder. He loves climbing about in clean laundry but if you leave any on the floor or dirty laundry where he can get to it, he's gonna pee in it. Almost inevitably. It helps us to keep clothes off of the floor and laundry washed but it is a serious pain in the ass sometimes. When we had a house with a backyard, he used to go outside when we were home to supervise. He'd scratch frantically at the sliding door and if it wasn't dark outside we'd usually let him out. We've been in a condo where he can't go outside and he still scratches at the big window in the living room if he sees a bird. He used to bring live birds and voles into the living room in our old house and let them go. That was always an exciting treat.

He probably did better in some aspects as an only cat but since we've brought him home a brother to play with he's gotten even more excitable and nervous. When Moses was small they would sleep together but now that Moses is twice his size and loves to tackle and bite him, Paul keeps his distance. Paul doesn't usually sleep with us. He prefers to sleep on top of a leather attache case on top of a bookshelf in the office. I usually try to remember to say "good morning" and "good night" to him. Oh, that's the other thing. His affection for leather and clawing things he shouldn't. Now that we got the new cathouse he's been a little better but he has destroyed a nice cream leather lounge chair that came with our condo (since the previous tenant didn't want it) and my office chair. Also the edge of our bed on both end corners has deep claw marks.